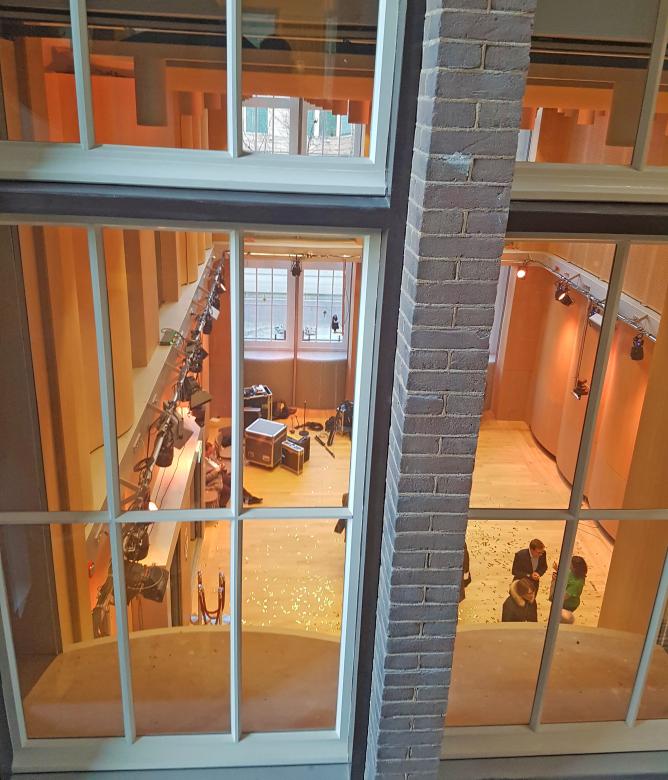 On Saturday January 19th the new home of the Royal Concertgebouw Orchestra in Amsterdam has been officially opened. Staff and musicians of RCO are extremely happy with their new premises that overlooks the Museumpark and their performance residence: the Concertgebouw.

The orchestra had a long lasting demand for a larger home with more office space, with several musical rehearsal rooms and a small hall for chamber music, group rehearsals and different kinds of events for education and for "Orchestra friends". It was therefore an amazing opportunity that the former Arts and Craft School by architect P.H. Berlage (1918) became available.

View into the RCO Amsterdamzaal

Even so, in the existing building there wasn't any space suitable as a chamber music hall. Peutz and TeamV studied several possibilities to design a chamber music hall as large as possible, in order to facilitate the broad range of instruments and other uses. The best space possible was created by joining 4 large class rooms and remove the floor in between. In order to further overcome the limits of the dimensions, variable acoustics by means of electric movable panels is part of the design.

Behind the original building, which also accommodates the foyer and offices, a new building is erected in which the rehearsal rooms are situated. Both buildings are designed with lots of daylight and nice views. This also gave way for the architect to design lovely internal vista's into the rehearsal rooms as well as the chamber music hall.