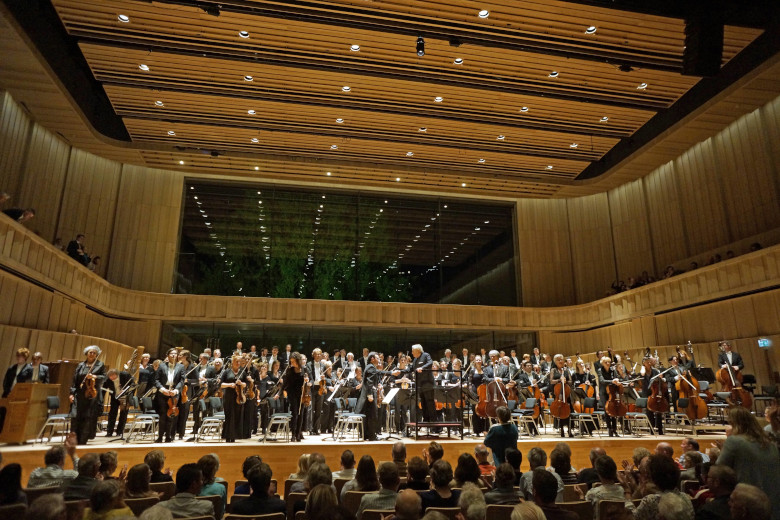 An ingenious and very cost effective design makes everything possible.

Building workers pretend to do some measurements still, escorting people to their seat in the hall. The evening sun lightens up the tree behind the stage and with that confirms the appropriate name for the hall. Even so appropriate is the first piece to be played by Het Gelders Orkest in combination with Het Orkest van het Oosten: Haydn's Ouverture Die Schöpfung.

At May 06th the new Arnhem concert hall is festively taken in use, a super climax for a period of very hard work of all people involved. The orchestra rehearsals prior to the concert were pretty exciting, as the chairs were not in the hall yet. The designed variable acoustics appeared to be of more use than we could ever dream of. Without these movable absorptive wall panels the orchestra rehearsals would not have been possible. Now every day a part of the chairs entered the hall, and a part of the variable acoustics was moved out, and with that, every day we came a step closer to the final result, with the last measurements being performed just a few hours before the concert. 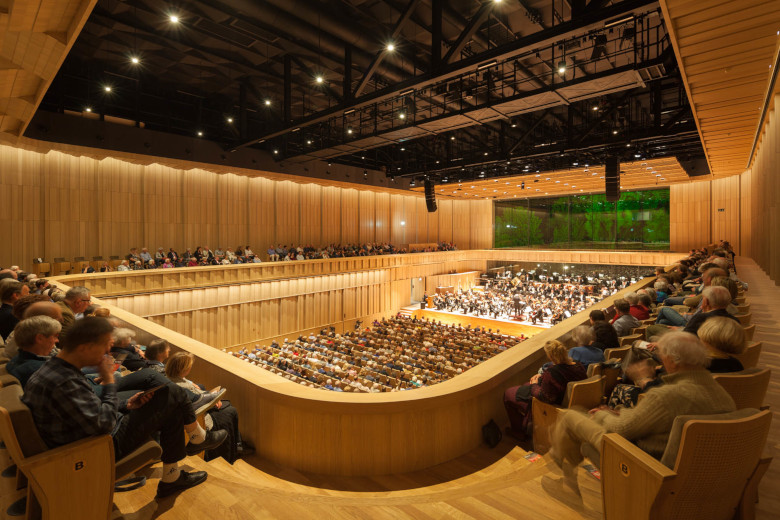 During the week the orchestra launched themselves to a sky high performance, which is of course the right level of performing  of Holst "The Planets", and with a big smile on their faces.
For the musicians the new hall is a dream come true. Finally they have a home with the right volume and acoustics for a broad symphonic repertoire. After a tough period with heavy salary cut's they now have found new energy and enjoy the music:
"In this hall, I don't want to stop rehearsing, I can continue forever"
"This hall is amazing, I love the sound and I can hear everything on stage"

The design of the hall is the product of a close working together between Van Dongen - Koschuch and Peutz. From the first sketches we together designed a concert hall with a larger volume and more height than the Programm of Requirements prescribed. The goal was to realize a hall suitable for a large range of music, including larger symphonic performances.
A real eye catcher is of course the double glass facade behind the stage, which main purpose is to let the music be a part of the city, visible for everyone, to attract, to invite, to inspire and to bond. But it is also possible to open the glass facade and play into the park.
The acoustic design was supported with computer modeling as well as a 1:10 scale model. A major aspect of the investigations was the flat rear stage wall. From an acoustic point of view the flatness of the rear wall is much more important than the fact that it is glass. But the results showed that the needed diffusiveness could be realized by all other surface shapes present in the hall, and the musicians embrace the daylight during their rehearsals.
All the wood structures are incorporated to sustain a warm and rich yet transparent and surround sound throughout the hall. The VIP seats besides the stage have their origin in the acoustic goal for good stage acoustics, in combination with the reflectors above the stage.
The variable acoustics by means of sliding wall elements can eliminate all wall reflections. These panels are highly absorptive in a very broad frequency range into the low bass frequencies and turn the hall acoustically and visually into a pop venue.

The existing and monumental building with the "Klassieke Zaal" is now being renovated. The whole building will officially be opened at Janury 12th 2018. 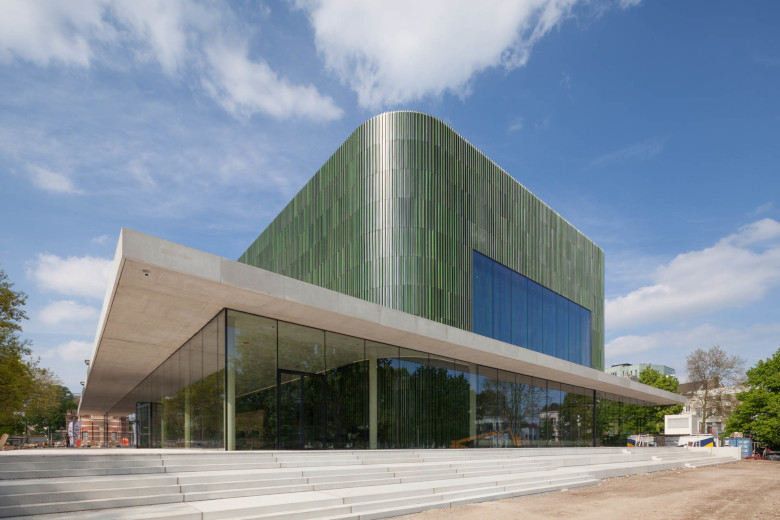